The 2013 Genius Awards Finalists Get Their Cakes!
The Stranger, Kelly O

And the nominees for the 2013 Genius Awards are…

Jinkx and Jerick: From ‘Rent’ to RuPaul
The Seattle Times, Melissa Davis

No Two Performances Will Be the Same
The Stranger, Melody Datz

A cyclist almost hits a parked car straining his neck to watch Ezra Dickinson tour jeté down Stewart Street. Dickinson is not tall, but his long arms and high balletic leaps and jumps cut through the apathetic throng of people hanging around outside of the Greyhound bus station. The loiterers perk up and watch—interested or confused or amused or all of the above. Whether they want to or not, they’ve become part of Dickinson’s stage.

The Seattle Center theater formerly known as Intiman Playhouse is now under the management of Cornish College of the Arts, and it has a new moniker: The Cornish Playhouse at Seattle Center. 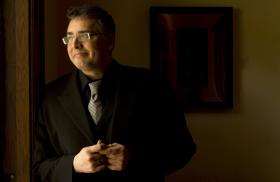 Composer Eric Banks Takes Audiences On Intellectual Adventures
KUOW, Amy Radil
If your concept of choral music is somewhere between the TV show “Glee” and the Kings College Choir, the music Eric Banks loves may come as a revelation.